As countries around the world launch Covid-19 vaccination programs, Vietnam is emerging from the pandemic as one of the global economy’s strongest survivors.

The gross domestic product of the Asian nation of 96 million people rose 2.9% last year, making it one of the only economies in the world, along with China, to record positive growth in 2020.

Vietnam’s remarkable success has been due to an efficient lockdown program that limited deaths to under 50, compared with around two million worldwide, and a robust economy propelled by one of the world’s most successful export programs, according to an analysis by Trade Data Monitor.

The 2020 gross domestic product, although lower than in 2019, followed two straight years of economic growth over 7%, Vietnam’s General Statistics Office said last month. “However, amid the negative impacts of the COVID-19 pandemic, it is considered a success for Vietnam, with the growth rate among the world’s highest,” the GSO said.

Vietnam’s rise to prosperity after recovering from the ravages of war has followed a familiar script. Like China a generation ago, it’s invited manufacturing and export zones up and down its long coast, stimulating construction and investment, starting with garments and footwear and now evolving into cars and electronics. It’s also modernized its ports, roads and rail systems.

It’s a big payoff for international investors, who’ve intensified their focus on the country. Between 2010 and 2019, Vietnam attracted $143 billion in foreign direct investment, according to the U.S. State Department. Of that, 59% went into manufacturing, much of it designed for exports to rich Western markets. 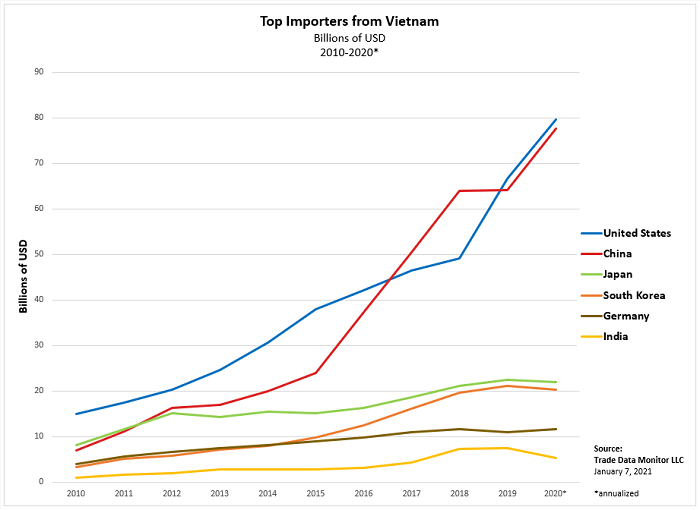 That trade deficit is a big reason that in December the U.S. slapped a label of currency manipulator on Vietnam, which will make it easier for companies and their lawyers to request tariffs from the U.S. federal government. “Vietnam is the new China production platform, so that’s going to attract attention,” says a lawyer for a top trade firm. Still, tariffs are minimal for now, and it will be a long time, if ever, before Vietnam catches up with China.

Vietnam is part of a trend. As China has faced more tariffs from the U.S. and Europe, and experienced higher wages, companies have outsourced their factories across Asia, to countries including Malaysia, Thailand, Singapore, and the Republic of Korea. 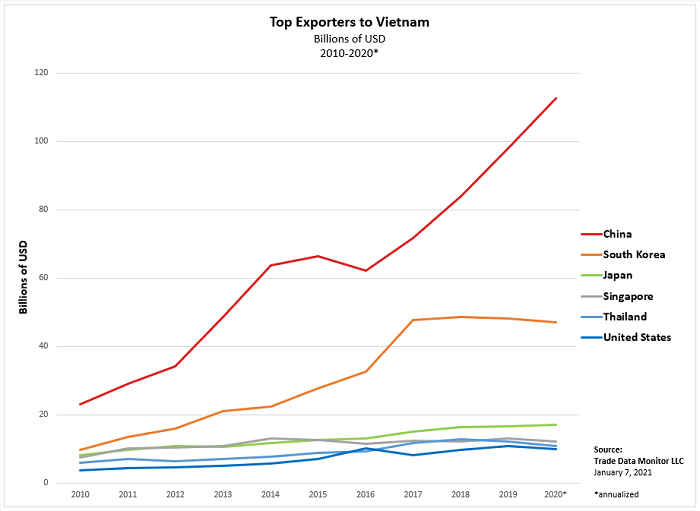 In many cases, those exports are parts that are then assembled into finished goods, like phones and laptops, to send to the U.S. Vietnam is now the U.S.’s seventh biggest source of imports. U.S. imports of Vietnamese goods increased 17.1% year-on-year over the first 10 months of 2020. Shipments of electronics over that time increased 23.4% to $22 billion.

Vietnam has also become a big manufacturer and exporter of basic goods like garments and footwear. Chinese imports of footwear from Vietnam increased 15.8% to $2.7 billion in the first 11 months of 2020.

Like other manufacturing powers, Vietnam experienced shutdowns and slowdowns in 2020 because of the Covid-19 pandemic, including at plants owned by carmakers Honda, Toyota, Nissan and Ford.

But now business is humming again. The World Trade Organization has predicted a 7.2% rebound in global trade in 2021, a recovery in which Vietnam is now expected to play a major role.