The Impact of the Coronavirus on Chinese Trade

The Impact of the Coronavirus on Chinese Trade

As the U.S. started taking in the full impact of the novel coronavirus, or Covid-19, in March, it’s worth looking at how the virus affected Chinese trade.

The outbreak of the virus, and efforts to stop its spread, dented Chinese exports and imports, with a much bigger impact forecast for the rest of the year, according to an analysis of statistics from Trade Data Monitor and the Chinese government.

Chinese exports declined 17.2% in the first two months of 2020 compared to a year before, and imports fell 4%. The upshot: China notched a $7.09 billion trade deficit, its first shortfall in almost two years. (The country’s customs agency combined the first two months in a single data release to cushion the dip caused by the Lunar New Year, which is set at a different time each year.)

Analysts are predicting a short-term decline of at least 2% in global GDP, with a recovery as economic confidence returns once the impact of the virus is absorbed, and fears subside.

The dip comes after a recovery from a downturn caused by the trade war between the two economic superpowers. That outlook has improved as Washington and Beijing negotiate and sign new trade agreements.

Hubei province, where Wuhan, the center of the coronavirus outbreak, is located, is seen as an important commercial hub in the country. With almost 60 million inhabitants, it has nearly as many people France or the UK. The province exported $36 billion worth of merchandise goods in 2019, up 6% from the year before, to customers all over the world, led by the U.S., India, Vietnam and Brazil. 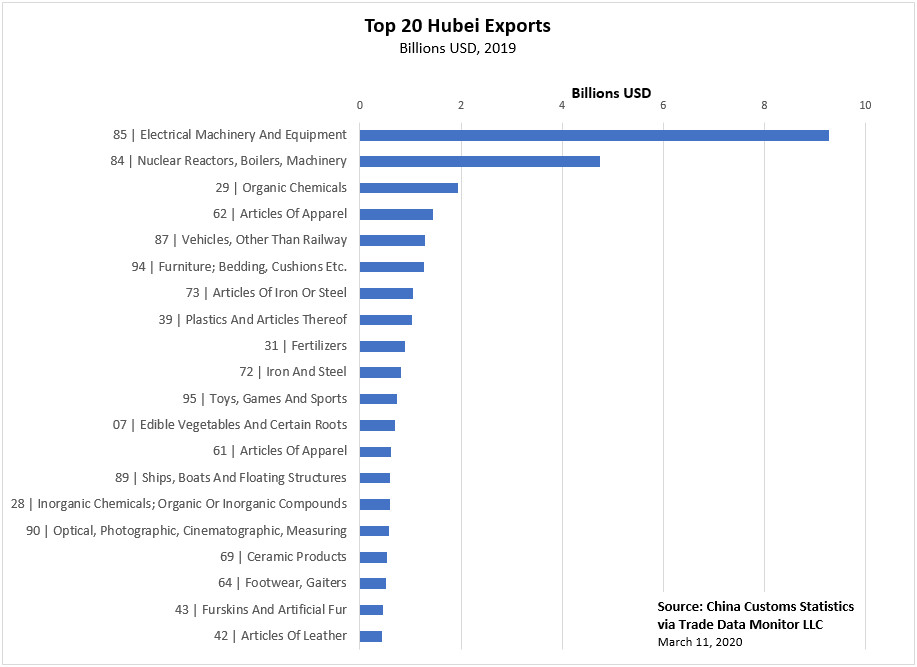 Guangdong, China’s top exporting province, Henan, and Zhejiang have also been affected. In 2020, Guangdong, a coastal region of 113 million where Guangzhou is located, exported $629.2 billion, up 2.7% from the year before, the highest total of any of China’s 23 provinces.

The virus has infected over 80,000 people and killed over 3,000 in China’s mainland. The government has ordered plants to close and workers to avoid travel. Economic activity has suffered, with fewer people eating business lunches, driving rural roads and shopping.

All over China, factories have suspended production, salespeople have curtailed meetings and travel, and ports and roads have been tied up as Beijing struggled to stop the virus from spreading.

But already, President Xi Jinping, worried about longer-term effects, has told regions less affected by the virus to fire up factories again.

But even if China resumes normal production, it faces a world where almost every country could be facing its own version of virus-related economic slowdown. Over 130,000 people outside of China have been infected, and over 4,500 people have died, forcing other countries to follow China’s lead and shut down neighourhoods, schools and factories.

That will cut into consumption, and imports. In 2020, Hubei imported $21.1 billion, up 13% from 2019. Much of that was industrial goods, raw materials and parts that are part of China’s roaring industrial supply chains.

As the virus spreads, economists are talking about so-called “rolling recessions” spreading from one part of the globe to another, slowing down supply chains in key areas at different times and forcing businesses to scramble for alternatives. China was the first to catch the cold.