Saudi Arabia Bets Chemicals and Plastics Will Rebound After Covid

Saudi Arabia Bets Chemicals and Plastics Will Rebound After Covid

As Saudi Arabia battles to prop up oil and gas markets amidst the worst global economic downturn in decades, it’s facing renewed challenges to its mission of diversifying exports away from the traditional petroleum pillar.

Crown Prince Mohammed bin Salman has embarked on the most serious effort since the desert kingdom’s founding in 1932 to build an economy that can prosper beyond a finite fossil fuel resource. And while the global Covid-19 pandemic has dented the growth of that so-called Saudi Vision 2030 program, an analysis of trade statistics suggests the country has laid a foundation for a more sustainable economic future.

To be sure, there’s no way of minimizing just how badly the pandemic is damaging global trade. In the first quarter of 2020, Saudi Arabian non-petroleum exports shrank 13.6% year-on-year to $12.7 billion. “The kingdom has not faced such a crisis—neither healthwise nor financially—for decades,” Finance Minister Mohammed al-Jadaan said in a recent interview. And, in the last few years, Saudi Arabia has struggled to manage tense relationships with the U.S., Russia and other key trading partners.

At the same time, it’s persisted in efforts to integrate with fellow members of the G20 club of the world’s richest economies. An analysis of trade statistics suggests Saudi Arabia has built a more diversified export base. The kingdom’s non-petroleum exports increased to $57.1 billion in 2019 from $19 billion in 2005, the year it joined the World Trade Organization, according to Trade Data Monitor, the world’s top source of trade statistics.

As Prince Mohammed has slashed subsidies and tried to stimulate investment in new sectors like tourism, with mixed success, he’s also continued to push investment in petroleum-related industries, plowing tens of billions of dollars into new petrochemical projects.

In 2019, Saudi Arabia registered exports of over a billion dollars in 11 separate trade categories, topped by plastics ($18.8 billion) and organic chemicals ($12.2 billion), and including ships and boats ($2.3 billion), aluminum ($2.1 billion) and fertilizers ($1.1 billion). 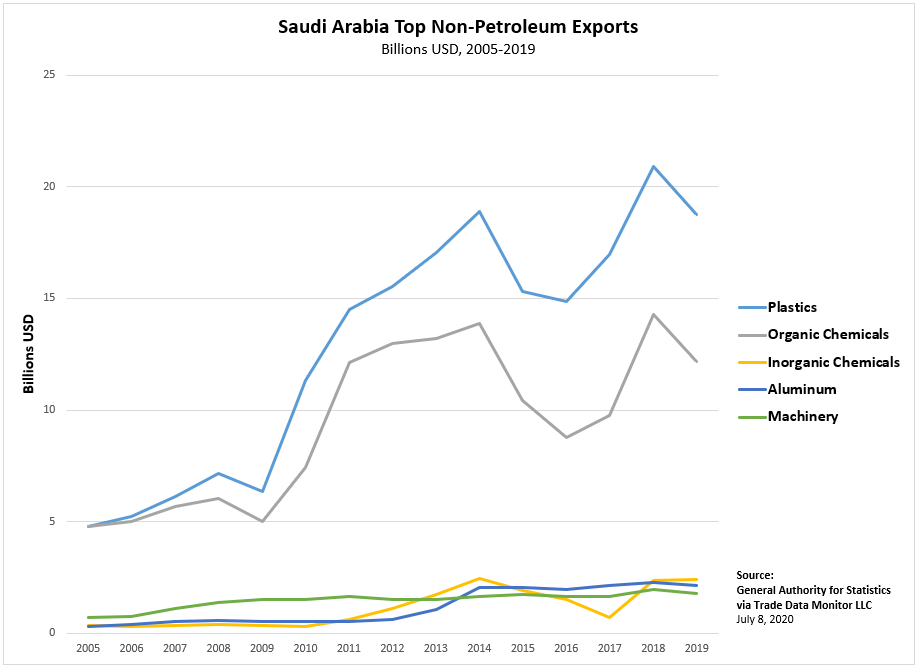 The challenge for Saudi officials has long been to use the oil and gas industry as a base to expand downstream into the rest of the industrial economy. Why not make plastics, chemicals and all the other petroleum-derived industries in the country itself, instead of shipping it to other countries for processing?

That’s why the country has aggressively recruited chemicals giants like Germany’s BASF, France’s SNF, Anglo-Dutch Shell and Japanese Mitsui & Co, and industrial firms like aluminum maker Alcoa, a joint venture partner on a massive complex that includes a bauxite mine, smelter and rolling mill.

While Saudi Arabia has struggled to create industries that rival petroleum’s in size, one thing it has going for it is its network of shipping customers all over the world. In 2019, it sent over a billion dollars of non-petroleum product to 12 different countries, led by China ($9.3 billion), UAE ($7.6 billion), India ($3.8 billion), Singapore ($3.5 billion), and Turkey ($2.1 billion). Its biggest market, China, bought $5.5 billion of organic chemicals and $3 billion of plastics in 2019, key ingredients needed to build what will eventually be the world’s biggest economy. In the first fourth months of 2020, a rare bright spot was the shipment of $248.5 million of precious metals and jewelry to Switzerland, a 110% increase, according to TDM data.

Oil, it seems clear, isn’t going away any time soon. Saudi Arabia controls over 15% of the world’s proven petroleum reserves, and oil and gas make up half of its gross domestic product, and two-thirds of export revenues. Aramco, which controls Saudi production, turned a eye-popping profit of $88.2 billion in 2019.

Despite the curse of so much uncertainty, using the raw material you have in hand to make a diverse cluster of industrial goods the rest of the world needs – and will buy as the economy recovers – seems like a good bet.