The economic anchor of Eastern Europe is Poland, the most successful of all former Soviet bloc nations. Thanks to its trade prowess, the country is turning into one of the economic pillars of all of Europe.

In the first half of 2020, Poland exported $121.6 billion worth of goods. That’s more than bigger countries like Australia or Brazil—and a dramatic increase from the $77 billion Poland exported during the same period in 2010. Its portfolio of strong export business includes industries as diverse as autos, steel, plastics, pharmaceuticals, furniture, wood, meat, potatoes, and tobacco, according to an analysis by Trade Data Monitor, the world’s premier source of export and import statistics.

The keys to its success have been its large population (38.2 million, more than any Eastern European EU neighbor), low labor costs relative to Western Europe, central location, and proximity to Germany, an industrial titan and the world’s third greatest exporter.

Poland is now Germany’s fifth largest trading partner, behind only China, the U.S., Netherlands, and France. Consider this: Germany now trades more with Poland than with Italy, Russia, or the UK. Germany and Poland’s combined industrial network resembles that of other powerful trade and manufacturing pairs, such as Australia-China, U.S.-Canada, and Japan-Taiwan.

Poland’s dramatic rebuild after struggling with poverty during the 20th century has turned it into one of the most diverse economies in the world, with a long, sophisticated supply chain that means it is better equipped than most of the European Union’s 27 other members to weather the coronavirus crisis. In fact, during the 2008-2009 financial crisis, Poland was the only country to avoid a recession.

Already it’s clear that Poland won’t fare as well this time around, despite registering relatively low numbers of coronavirus cases and deaths. The economy is expected to shrink this year by over 3%, its first contraction in decades. 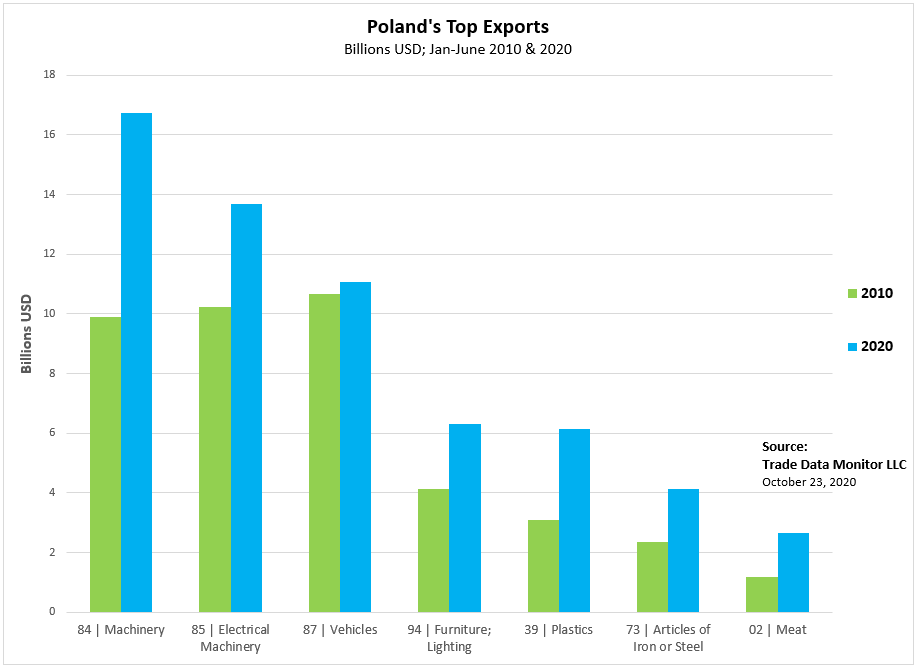 The auto sector, in particular, has been a boon. Total auto exports rose to $30.3 billion in 2019 from $20.9 billion in 2010. Fiat, Toyota, Volkswagen and other major firms all produce cars and parts in Poland, often as part of supply chains that include factories in Germany.

That kind of integration was what Poland was hoping for when it joined NATO in 1999, and the European Union in 2004. Massive EU investment in infrastructure set up the road, rail and port routes that enable massive imports and exports of industrial goods, including iron and steel, plastics, and autos and auto parts from Germany. The country’s middle-class population has also boosted consumption of imports, which rose to $265.3 billion in 2019, up from $177.9 billion in 2010.

To be sure, Poland still faces challenges, including political tension, anti-German public sentiment related to memories of World War Two, infrastructure weaknesses, restrictive labor laws and emigration to Western Europe. And there’s the coronavirus. A second Covid-19 wave “will again negatively affect industrial production,” said Monika Kurtek, chief economist at Bank Pocztowy, according to Reuters. But thanks to trade, Poland is expected to recover. In 2021, its economy is expected to expand by 3.5%, according to the World Bank.