How Nigeria’s Battered Oil and Gas Sector is Surviving Covid

How Nigeria’s Battered Oil and Gas Sector is Surviving Covid

The most populous country in Africa, Nigeria has built up its economy as a petroleum powerhouse. The OPEC member has become a key supplier of oil and gas to India, Europe, the U.S., and China. Abuja’s business district is packed with the offices of major oil companies. Although the sector leaves out a large number of Nigerians and makes it harder to export other goods by inflating domestic currency, the petroleum sector now makes up over half the Nigerian government’s revenue and over 80% of foreign exchange, according to data from Nigeria’s trade partners.

The Covid-19 pandemic, which has crippled oil-reliant transportation industries around the world, is one of the most challenging times in Nigeria’s modern economic history. The government has had to cut its budget for this year by $5 billion, and borrow $7 billion from the International Monetary Fund. According to Fitch Ratings, Nigeria’s break-even oil price is over $130 a barrel, roughly three times the current level. That’s challenged the country of 214 million, many of whom operate in a massive informal economy, to maintain its standard of living.

As oil buyers and sellers recalibrate their strategies around the world, they are tracking global trade flows. According to an analysis of export and import statistics by Trade Data Monitor, Nigeria’s petroleum shipments to most key trading partners have increased by volume in 2020, although they’ve fallen by dollar value as prices decline.

What’s happening is that oil traders and buyers are stockpiling oil reserves and hedging for when prices recover after the pandemic. However, there’s a limit to oil storage capacity, so the trend can’t last forever.

Like other emerging economies, including Brazil, South Africa and Thailand, the question for Nigeria is how much it can diversify its economy. Over the past decade, it’s found a niche exporting to India, its largest trading partner. Its next biggest importers, in 2019, were Spain, the Netherlands, U.S., and France. China is seventh. The relationship with India has its origins in the British Empire, which both belonged to. India supported Nigeria’s declaration of independence in 1960. They are both the largest democracies in their regions. 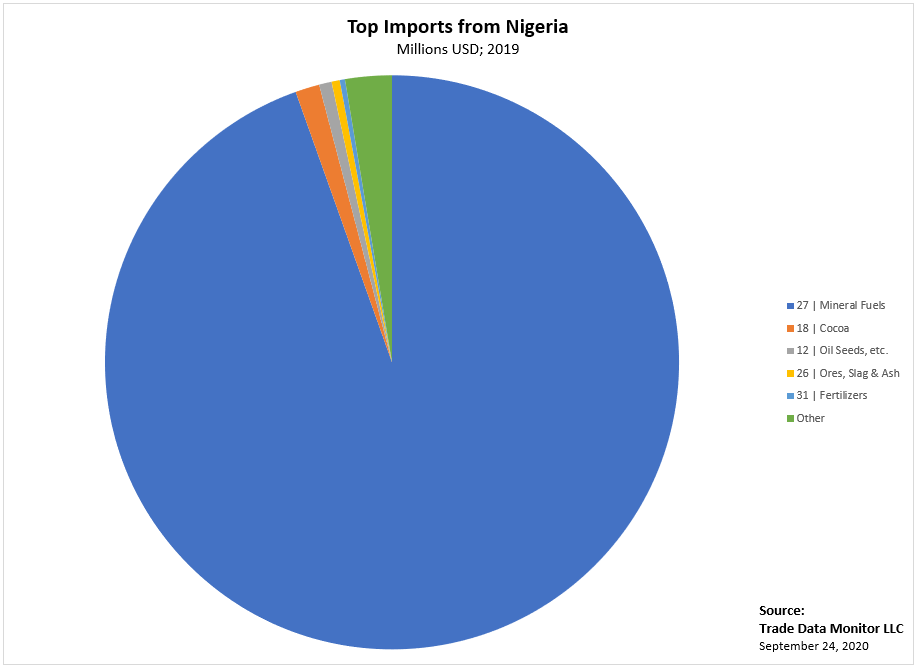 China is by far the biggest exporter to Nigeria, followed by the Netherlands, India, the U.S. and Belgium, because its factories make a huge slice of the consumer goods – phones, shoes, tablets, car parts – that enable Nigeria’s burgeoning middle class economy. In 2019, China’s $16.6 billion of exports to Nigeria included $1.9 billion of electronics, $1.3 billion of apparel and $1.1 billion of automotive gear.

Nigeria is betting on a strong oil recovery after Covid-19 to sustain that level of imports.