As China relaunches its Belt and Road Initiative, an analysis of trade statistics for 10 key BRI economies suggests that the BRI has increased trade with Beijing and fueled China’s trade surplus and underscores the project’s vulnerability to financial crisis in individual countries.

When president Xi Jinping announced the endeavor in 2013, it was intended to amplify China’s status as the world’s dominant trading power, by building more ports, roads and rail links, and jumpstarting companies across the breadth of China’s orbit—a 21st century Silk Road including 68 countries, 4.4 billion people, and USD21 trillion in gross domestic product.

One thing is certain: The network is a direct challenge to the United States as trade relations with the Trump administration worsen, setting up dueling power poles in the world economy, and begging the question: How has the BRI worked out for China so far?

A study of first quarter 2019 export and import data published by Trade Data Monitor from 10 key BRI countries shows that in two economies (Kazakhstan and Turkey) total trade with China has declined since 2013. In eight others (India, Indonesia, Egypt, Iraq, Thailand, Malaysia, Vietnam and Pakistan), that number has risen since 2013. 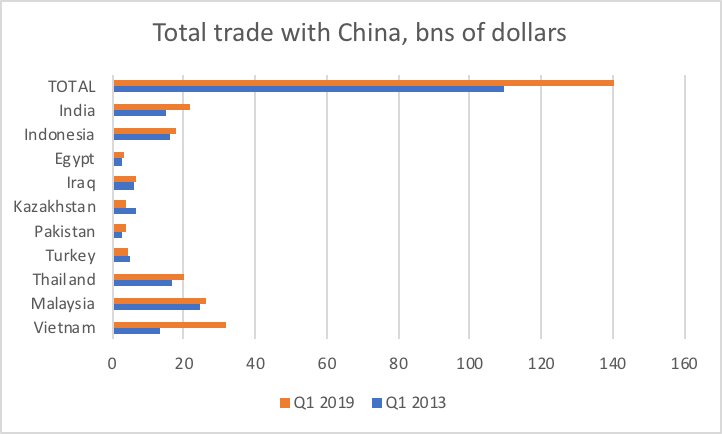 A few trends worth noting

But in Pakistan a struggling economy has dented demand. The government is negotiating a USD 8 billion bailout package with the International Monetary Fund. In the first quarter of 2019, trade between China and this sprawling country of 200 million fell to USD 4 billion, down 17% compared to the same period in 2018. In Q1 of 2019, Pakistan imports of cars, steel, plastics, fertilizers, electronics and electric parts from China all fell over 15% relative to the year before, according to TDM data.

It’s not enough to build new tracks and roads and send trucks and trains full of goods to sell. You also need customers at the other end with the capital to buy them.