The world’s population has more than tripled since 1950, to almost eight billion. By 2050, it’s expected to reach 9.7 billion. All those people need to eat, and farms must keep fueling higher yields. That’s heated up global trade in the stuff that helps plants grow — fertilizers.

This global USD 160 billion market is expanding at 4% a year and is especially robust in Asia, which accounts for roughly half of global demand.

The fastest-growing fertilizer exporter is China, according to an analysis by Geneva-based Trade Data Monitor (TDM). In the first six months of 2019, Chinese fertilizer exports increased 31% year-on-year to USD 3.4 billion. China has now leapfrogged Canada and is second in the world in fertilizer exports, behind only gas-rich Russia. 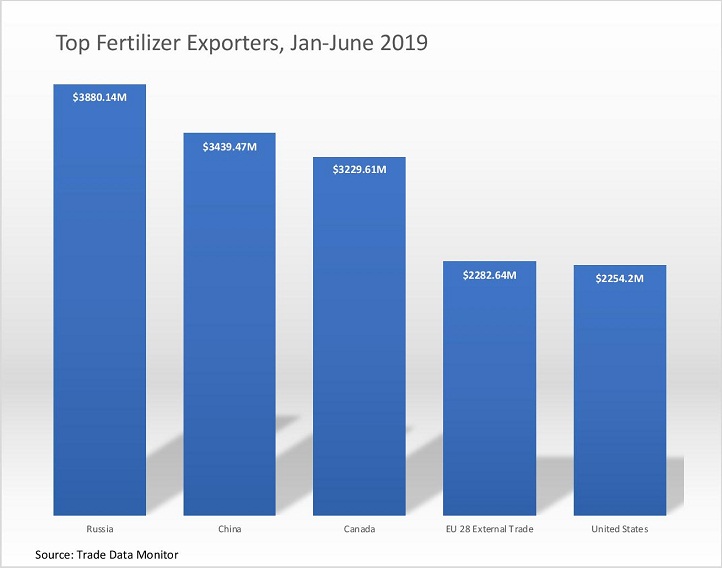 The biggest buyers of fertilizers are farming powers. The world’s top importers are the US, Brazil, India, China and Australia, according to TDM data. Brazil ramped up imports 32% in the first six months of 2019, to USD 4.8 billion. Its main sources were Russia, Canada, the US and China. Recently elected president Jair Bolsonaro has been loosening restrictions on deforestation to benefit massive fertilizer-hungry soybean and sugar cane farms.

A quick refresher on where fertilizers come from: They can be made of nitrogen derived from natural gas, or out of potash or phosphate rock mined out of the ground. Nitrogen fertilizers can also come from manure, garbage and sewage. In Jamaica, bat guano is even used to produce nitrogen-based plant food.

Big natural gas producers like the US, Russia, Belarus and Qatar have become top producers and exporters of fertilizers, as have mining powers like Canada, Indonesia, and China, which is the world’s top phosphate producer. In Canada, potash is mined thousands of feet below the earth’s surface, out of sediment left behind hundreds of millions of years ago by the evaporation of gigantic lakes.

China’s top customers are India, Australia, Brazil, Indonesia and Vietnam. The world’s top importer is the US, but it buys mainly from Canada and Russia. 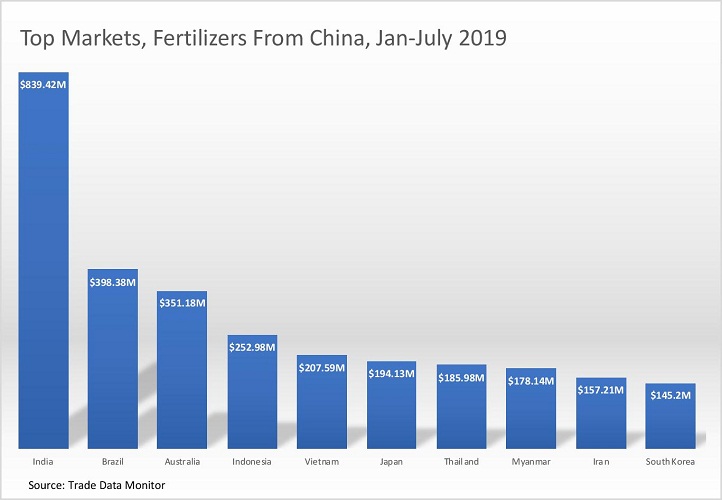 Fertilizers, a complex agricultural chemical product, are one of the ways that Chinese industrial companies have been developing higher-margin commodities, in the same way its economy has moved from making toys to computers.

Not only is China a top producer of phosphate, it has also invested heavily in final commercial fertilizers, ready to sell to farms. These are made from a mix of nitrogen, phosphates and potassium, much of it imported as part of global supply chains. Farms then use high-tech machines to apply these fertilizers as solids, gasses or liquids. This is where Beijing has been carving out a niche. It’s now the world’s number one exporter of mineral or chemical fertilizers with two of the three fertilizer elements.

To be sure, the agricultural-industrial complex and the fertilizer firms that nourish it face challenges from environmental regulators, as well as food trends that are moving people toward healthier organic options. In addition, changes in diets mean that the world’s per capita demand for food is stagnating, according to the Rome-based Food and Agricultural Organization. And it’s a tough industry to consolidate, with thousands of producers around the world and relatively high shipping costs.

Still, the quest to improve agricultural yields with plant nutrition is not going away. And it’s not just traditional crops for human consumption. The plant-based meat and ethanol fuel industries are also boosting demand for fertilizers.

Trade Data Monitor (info@tradedatamonitor.com) is a Geneva and Charleston, SC based supplier of import and export statistics from 111 countries.