China Chases Trade Growth in Eastern Europe and the Balkans

China Chases Trade Growth in Eastern Europe and the Balkans

China and Europe have long been twin pillars of global trade. Renaissance London, Bruges and Rome imported porcelain, silk and tea. The original Silk Road connecting ancient China and South Eastern Europe and the Middle East dates to before Christ.

Beijing’s ongoing struggles to forge fresh terms of trade with a more protectionist US administration have overshadowed its relationship with the EU – still the world’s largest economic bloc – and its neighbours.

Chinese development in the 21st century has focused mostly on shipping and selling to well-off consumers in France, Germany, and other Western European nations. But the fastest-growing segment of trade with Europe has been with Poland, Slovakia and other members of the former Soviet bloc. Market reforms in the 1990s and 2000s have sparked robust economic growth in those countries.

With the promise of further growth in mind, in 2012, China launched the so-called 16+1 initiative, or China-CEEC (Central and Eastern European Countries) summit, as a principal way of growing its Belt and Road Initiative, a modern Silk Road aimed at boosting global economic integration.

The deal established regular meetings between Beijing, 11 EU members, and five Balkan nations. What made these markets so exciting for Chinese trade officials is that they’ve been increasing in size and value from a low baseline, meaning there’s plenty more room for growth. The then premier, Wen Jiabao, announced the launch of a USD 10 billion credit line.

The total list of countries included in the deal includes Albania, Bosnia and Herzegovina, Bulgaria, Croatia, the Czech Republic, Estonia, Hungary, Latvia, Lithuania, Macedonia, Montenegro, Poland, Romania, Serbia, Slovakia, and Slovenia. Greece, geographically close, was later added to the mix, making it the 17+1 and offering China an opportunity for multilateralism, as well as a solid forum to organize bilateral deals.

Since 2012, China has invested USD 15.4 billion in ports, roads and other infrastructure. It’s helped build a highway in Serbia, reinforced rail links with Europe, and bought a Polish engineering company. “Since 2012, 70 percent of announced deals have been in non-EU member states even though they make up only 5 of the 16 participants and only 6 percent of the group’s collective GDP,” the Centre for Strategic and International Studies wrote recently.

Imports into those countries from China increased to USD 90.1 billion in 2018 from USD 12.4 billion in 2008, according to Trade Data Monitor, the world’s top source of trade data. In 2018, the biggest importer of Chinese goods in that group was Poland (USD 31.2 billion), followed by the Czech Republic (USD 25.3 billion), and Hungary (USD 7.6 billion). Eastern Europe’s imports have included a mix of consumer and industrial goods. Poland’s top category of imports is electrical equipment, such as telephone line gear, followed by circuit boards and other computer equipment, and then toys and clothes.

To be sure, the initiative has come with some hiccups.

There have been delays. Although China has completed projects in Serbia, in Romania, for example, the construction of proposed new power plants is behind schedule because of complicated negotiations between the Romanian government and Chinese construction firms. For Brussels, the arrangement has been perceived as something of a threat to EU oversight. In 2016, the European Commission demanded that any treaty signed with the group be “in line with EU law, rules and policies, and that the overall outcome is beneficial for the EU as a whole”, a stance repeated by the European Parliament in 2018. Growth in Eastern European exports to China have lagged behind increase in imports. Exports rose to USD 12.8 billion in 2018, from USD 9.5 billion in 2012.

But there’s no denying the potential of a market of such size and fast-growing consumer income. And success can’t only be measured in business terms. In the five years after 2012, the number of Chinese tourists to the 16+1 region increased to 930,000 from 280,000. 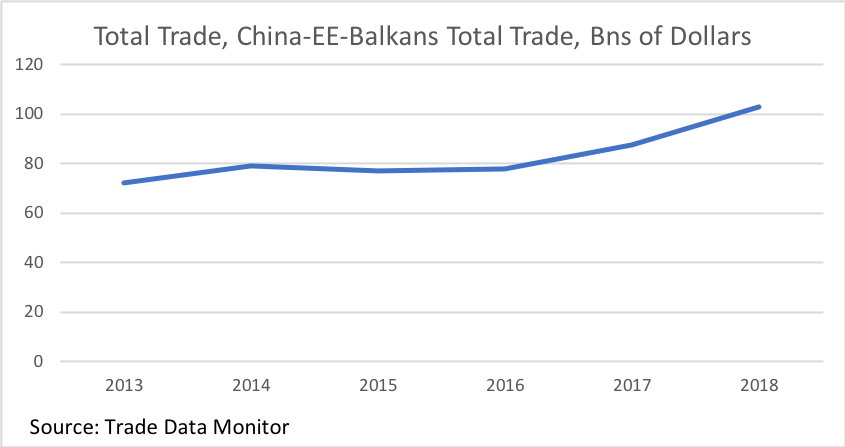 Trade Data Monitor (info@tradedatamonitor.com) is a Geneva, Switzerland and Charleston, USA based supplier of import and export statistics from 111 countries