The global Covid-19 pandemic is the global economy’s biggest speed bump this century. The International Monetary Fund has said it could shrink the world’s gross domestic product by 3%, and possibly more. Among those that have to adjust the most is China’s mammoth trading economy, the linchpin of global trade.

The long-term disruption still isn’t clear, but already, China is importing more commodities like oil and soybeans, losing exports of consumer items like phones and home appliances, and industrial goods like steel, aluminum and cars, and beefing up outgoing shipments of medical supplies to help fight the pandemic, according to an analysis of May exports and imports by Trade Data Monitor, the world’s premier source of trade statistics.

With so much in flux right now, including a dispute over Hong Kong, the U.S.-China trade war, and coping with the pandemic lockdown, businesses, governments and organizations are tracking data as closely as they can, especially trade statistics.

One trend that’s already clear: With uncertainty abounding, a scramble for key resources is afoot.

China has been ramping up imports of agricultural products. That’s partly because of an agreement with the U.S. to lower tariffs. But it’s also part of a broader trend as nations seek to ensure plentiful food supplies. Chinese meat imports rose 46.7% in May to $2.4 billion from $1.6 billion in May 2019, while soybean shipments increased 25.6% to $3.6 billion. Cereal imports rose 29.5% to $4.4 billion.

World Bank President David Malpass in a recent BBC interview called Covid-19 a “devasting blow” that would disrupt the livelihoods of “billions” and last at least a decade. Those billions include consumers and businesses from all seven continents who buy the iPhones, shoes, furniture, and thousands of other products made in China.

Chinese exports of mobile phones shrank 12% to 66.9 million units in May, from 76.1 million units in the same month the year before. With hundreds of millions of people losing or getting furlough from their jobs, spending on discretionary items is going to take years to recover.

There are some exceptions to the gloom. Exports of medical devices to help fight Covid-19 and related diseases, almost doubled, rising to $2.1 billion from $1.1 billion. And textile exports soared to $20.7 billion from $11.5 billion.

For all the damage Covid has done to consumer markets, it’s been even harsher on industrial goods. Around the world, the pandemic has forced the closure of iron ore mines, steel mills, and car factories from Detroit to Japan. In May, Chinese auto exports fell 14.5% to $1.2 billion, and steel shipments declined 25.7% to $3.7 billion. 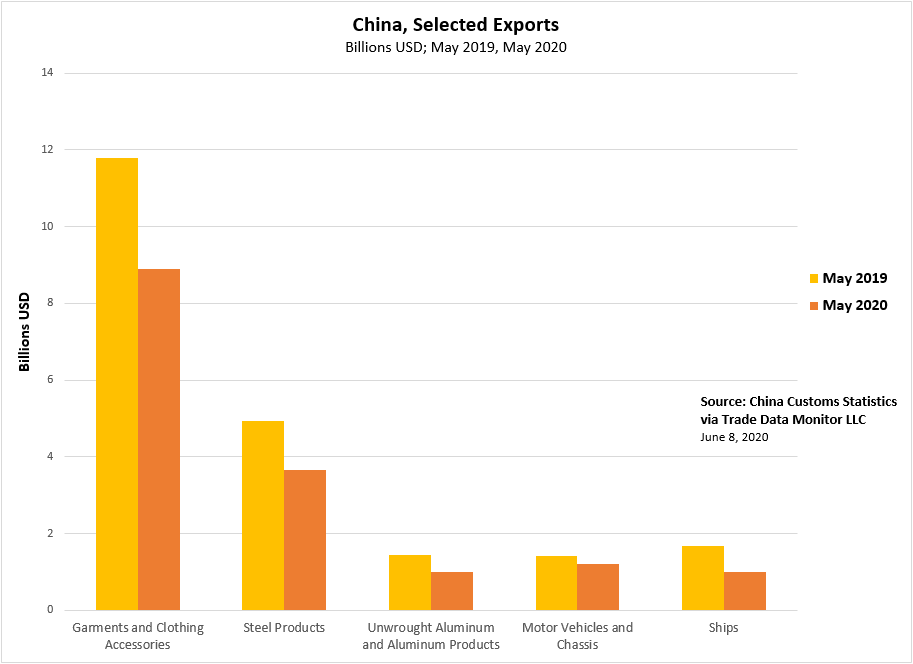 To be sure, because of its internal market, sheer size, and other advantages, China is likely to hold on to its status as the world’s dominant manufacturing power. In addition, the Chinese currency, the Yuan, is getting weaker as investors seek safety in the dollar, which will further fuel Chinese exports.

That was the highest monthly trade surplus in Chinese economic history.