As the UK leaves the EU on Jan. 31, partly as a populist reaction to Brussels expanding its powers beyond its original remit, trade is again a focus and worry of businesses, especially large industrial enterprises with complex supply chains, such as petrochemicals, industrial alcohols and plastics.

It could be the end of the 2020s before new trade terms are established, forcing companies to scramble to cope with contingencies and redraw complex supply chains.

The consequences of Brexit already include a shrinking of trade with the EU, and are likely to lead to higher costs and a redrawing of supply chains for key industries, according to a close analysis of import and export statistics from Trade Data Monitor, the world’s top source of trade data.

Britain exports to the EU decreased 7.2% to $159.9 billion in the first three quarters of 2019, while imports from the continent fell 4.6% to $268 billion over that time, according to TDM data assembled from customs agencies.

Industrial goods have been especially hard hit: UK exports of acyclic alcohols to the EU decreased 34.2%; ethylene polymers fell 15%; and total pharmaceutical shipments fell 21.8% over that time period, according to TDM data.

The issue is especially acute for companies whose supply chains span a tight network of North Sea ports and industrial hubs that include the ports of Antwerp and Rotterdam, and the Rhine/Ruhr area in Germany. The establishment of a globally powerful petrochemical hub harnessing North Sea oil, starring companies like BASF, Ineos and Solvay, is one of the great industrial victories of European integration in the past decades. And it’s what’s now been put at risk by Brexit.

Under the UK’s current agreement, it has until the end of 2020 to operate under current trade terms and negotiate a new deal. Trade negotiations are notoriously long, however, and require tricky negotiations with national lobby groups and parliaments. If the UK and EU don’t come to a new agreement, by the end of 2020, the countries will apply rates set by the World Trade Organizations.

In negotiations, trade data suggests that the EU will have the upper hand. The UK accounts for 15% of total EU exports outside the bloc, while over 40% of UK exports go to the EU. That gives EU negotiators more leverage. 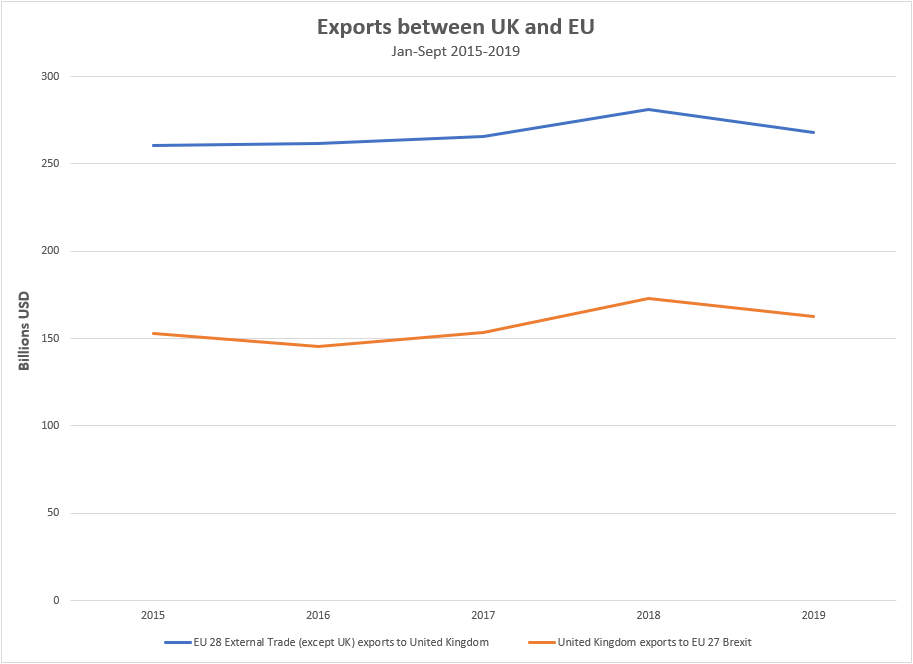 However, in a recent interview, European commission president Ursula von der Leyen said she was “very worried” about how little time was available. She expressed a willingness to expand the transition period, something prime minister Boris Johnson’s government has said it would not do.

The issue for companies reconsidering their supply chains is the cost of registering chemical products with European authorities. Under so-called REACH regulations, companies must register any chemical sold into the EU. Once Britain leaves, companies will have to establish production in the EU or have their importer register the chemical.

At the same time, anything made in the UK for shipment to Europe would have to be registered with British authorities.

For example, chemical giant BASF has estimated that giving up current trade terms cold turkey would cost the petrochemical giant 75 million euros a year. BASF officials say that they’ll have to weigh the cost of registering each of the over 1,000 substances they ship to the EU with the British authorities. Registering a chemical typically costs over 50,000 euros a year. If sales are below that, it might not be worth making or selling in the UK, forcing costs up for British buyers.

With Brexit, the UK isn’t just losing easy market access to the EU. It’s also dropping out of over 50 trade deals the EU has signed with third countries. UK leaders have talked of a trade deal with the U.S., but that could muddy the waters with the EU, which has much tougher environmental standards for agriculture, chemicals and other industries.

But clearly, the best market is still the EU, still the world’s richest and biggest bloc of middle and upper-class consumers. A year ago, for example, London-based Ineos said it would build a new £2.6bn petrochemical plant in the port of Antwerp. For industrial companies, the EU will always be too big to just write off.