In the post-coronavirus global economy, Brazil has a big advantage: A powerful export sector, geared toward shipping meat, as well as commodities like soybeans and iron ore, to China.

Brazil’s exports in March increased 10.4% from the year before to $19.2 billion, according to Trade Data Monitor. Shipments to China, Brazil’s top trading partner, grew 12.5% to $5.9 billion, thanks in large part to a boom in exports of soybeans, up 44% in March to $3 billion.

Meat exports more than doubled, rising to $451.1 million from $224.5 million. China is a pork culture, but the swine flu has wiped out a generation of hogs, and it will take “three to five” years for to replenish stocks, a top Brazilian meat exporter told TDM. Until then, it will need not just pork, but also chicken and beef. 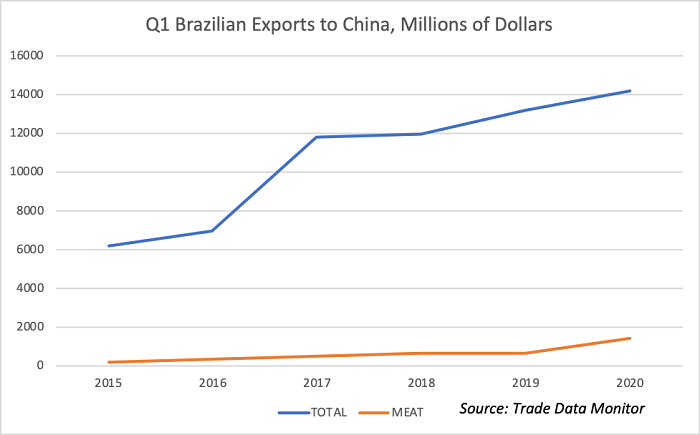 Supplying China, the world’s most populous country at 1.4 billion people, and soon the globe’s richest nation, is the best an economy can hope for, and in 2019, Brazil was China’s top meat supplier, followed by Australia, Spain and Argentina.

As pork has gotten more expensive because of tighter supplies, China has imported more beef and chicken. In March, Brazil’s beef exports to China increased 116% to $250.4 million. Poultry shipments grew 31% to $108.1 million. And pork shipments rose 250% to $92 million. “We’re seeing a real change in tastes,” the Brazilian exporter told TDM. “And as China reopens, restaurants are welcoming people again, and buying meat.”

He’s not the only Brazilian who should feel optimistic about surviving the pandemic crisis. In the post-coronavirus fallout, trade in essential food commodities will be more resilient than consumer goods, or commodities such as steel, copper and iron ore used in automotive, construction and industrial production.

And Asia, with younger, more vibrant economies managed by more authoritarian regimes able to restrict population movements, are likely to ride out the coronavirus pandemic more easily that the older, more sluggish EU and US. The pandemic crisis is accelerating movement of global economic power toward Asia.

Ready to take advantage of this trend is Brazil, a sprawling nation of 212 million with expansive farmland, that has positioned itself as a key supplier of agricultural goods and commodities to China, and also Singapore, South Korea, Japan and India.

To be sure, there will be challenges. Brazilian exports to the U.S., its second biggest export market, declined 7.6% in March, to $1.97 billion, as shipments of industrial and aircraft parts tumbled sharply. Another canary in the coal mine might be Brazil oil exports, down 25% to $3.2 billion. But then oil markets were suffering from overproduction even before the pandemic.

Brazil’s March imports didn’t show any steep decline from the year before. They increased 10.6% to $14.5 billion, including high-tech goods, chemicals and fertilizers, with the only significant declines were in oil and automobiles. That’s expected to change in April: As in other countries, Brazilian consumer demand is expected to suffer as the virus hits.

And Brazilian meat exporters say they fear that EU and U.S. companies will severely cut meat imports. Exports of fresh beef to the U.S. have been restricted by sanitary measures.

But it might not matter: It is China, not the U.S. or EU, that is already Brazil’s biggest customer.