As the first country to suffer the impact of the coronavirus, China is leading the way in restarting its economy, and its performance offers some clues to what the U.S. and EU can expect for the rest of the year.

To some, China’s performance is a sign of resilience. Markets on Thursday rose to the announcement by China’s General Administration of Customs that exports in April had increased 3.5% compared to the same month a year ago.

However, the longer-term outlook is likely to be worse: Consumer spending is down across the globe. Imports in April by China, the world’s most important consumer market, declined 14.5% in April, and economists expect subsequent decreases in investment and spending over the rest of the year. China’s economy in the first quarter shrank 6.8%, its first contraction in decades.

At the same time, even under a pandemic lockdown, countries have to maintain essential baselines of economic activity, and humans still need to eat and heat their homes, and perhaps even stockpile raw materials and essential life supplies if necessary. Chinese imports of meat, pharmaceuticals, iron ore, crude oil, coal, natural gas and soybeans all increased.

And a closer look at the data suggests that the pandemic, which has killed over 250,000 people worldwide, has accentuated a permanent shift in the way the global economy operates, slashing Chinese exports to the West, and fueling increased trade with Asian countries, according to an analysis by Trade Data Monitor.

For decades, China has supplied the wealthy consumers of the U.S. and European Union with phones, computers, clothes and other essential durables. Now, as those blocs enter their worst recession since the 1930s, China is having to turn its sights to Asia.

As Asian economies emerge into prosperous consumer blocs, they may be able to sustain China’s manufacturing dynamo a while longer, explaining the overall 3.5% rise in exports. But it’s hard to avoid the conclusion that the pandemic will cause a sustained global reduction in consumer spending and demand, with effects sure to ripple throughout the global economy. 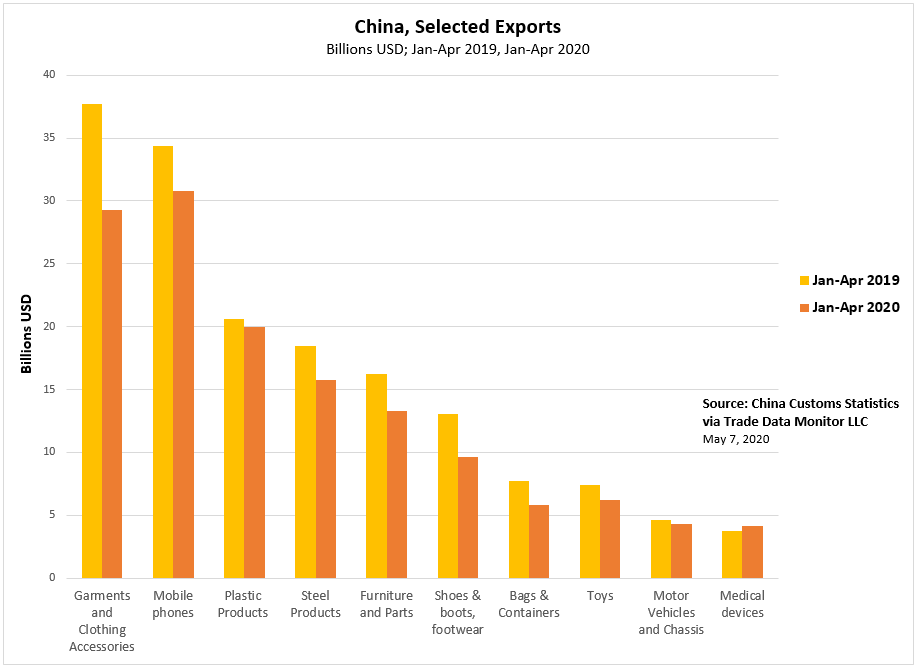 Overall, Chinese exports of clothing, plastics, furniture, shoes, toys, luggage, steel and cars all declined. Exports of the “mobile phone” category, for example, fell 10.5% in the first four months of 2020 to $30.8 billion. One outlier: masks. Exports of medical clothing and equipment surged.