A Booming Vietnam Must Balance U.S., EU and China

A Booming Vietnam Must Balance U.S., EU and China

The US-China trade war is catalyzing investments in third countries where executives know they’ll be able to manufacture and export with fewer import tariffs on the goods they’re making.

One of the countries benefiting the most is Vietnam, whose economy is undergoing one of the most remarkable booms anywhere this century. After pushing itself through economic reform, the formerly war-torn nation of 97 million is in the midst of a manufacturing and trade boom reshaping its place in the global economy.

Companies are investing heavily in new manufacturing plants, and packing container ships with electronics, shoes and shirts headed for Los Angeles, Rotterdam and other ports in the US and Europe. In the first six months of 2019, Vietnamese exports to the U.S. increased 33% to USD 30.4 billion, while Chinese exports fell 12% to USD 219 billion, according to Trade Data Monitor (TDM). Vietnam is now the US’s 8th largest supplier of goods, up from 12th in 2017.

In June, Vietnam signed a new trade deal with the European Union, which Brussels called the “the most ambitious free trade deal ever concluded with a developing country”. The agreement will knock out 99% of tariffs between the two parties. The EU imported USD 45 billion worth of goods in 2018, up from USD 12.8 billion in 2010.

“It is likely that within 10 years, US imports from Vietnam will be higher than imports from Japan, the country’s 4th biggest supplier,” said Don Brasher, president of Trade Data Monitor.

Vietnam’s top exports to the US are electronics, apparel, footwear, and furniture. In some categories, it’s easy to see how new US tariffs are changing trade flows, with Vietnam replacing China as the main source of product. In electronics, for example, Vietnamese exports to the US increased 97% to USD 9.8 billion, while Chinese exports fell 16% to USD 57.8 billion, according to TDM data. 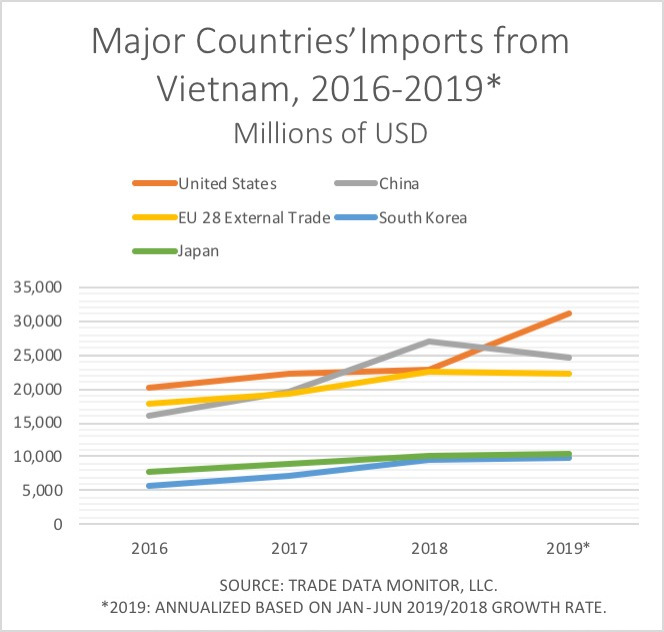 The creation of a strong export economy has helped Vietnam’s gross domestic product grow consistently at over 6% a year for the past two decades, while holding inflation and wages down and keeping its currency stable. And even better days may be ahead: two-thirds of Vietnam’s population is under 35.

To be sure, it’s not going to be all smooth sailing. Hanoi still imposes restrictions on foreign ownership and faces a risk of inflation from runaway growth. Its large informal economy is underregulated and undertaxed.

And with economic power comes tricky diplomacy. The challenge now for Vietnam is to balance its closer trading ties with Washington and its complicated relationship with China.

Vietnam is heavily dependent on imports from China. Chinese exports to Vietnam increased 14% to USD 44.6 billion in the first six months of 2019, suggesting a growing domestic market for Chinese consumer goods, more orders for parts to supply Vietnam-based manufacturers, and an increase in transshipment in order to avoid tariffs.

Another challenge Vietnam faces is deciding how much money to borrow from China for infrastructure under its so-called Belt and Road Initiative (BRI). The BRI, announced in 2013, is Beijing’s attempt to consolidate its trading power by funding infrastructure on a transregional scale. The initiative is billed as a 21st century Silk Road, including 68 countries, 4.4 billion people, and USD 21 trillion in gross domestic product. As the Chinese domestic economy cooled after decades of sizzle, Chinese leaders decided, the BRI would help foster new markets for Chinese firms, especially in construction, telecommunications and shipping, and help China outmuscle the US for influence.

Although Vietnamese leaders have endorsed the BRI in principle as part of closer economic ties with China, they’ve been slow to sign deals accepting Chinese funding.

“Given Vietnam’s cautiousness, the implementation of the BRI in Vietnam is likely to be slow,” warns Le Hong Hiep, a fellow at the International Institute for Asian Studies, in a recent paper. “However, due to rising public debt, Vietnam may refrain from applying for government-to-government loans. Instead, it may encourage domestic private investors to apply for BRI loans, especially from the Asian Infrastructure Investment Bank.” China, he concluded, “should acknowledge these challenges and work with its domestic stakeholders and Vietnamese partners to address them.”

Meanwhile, the new Vietnamese export machine keeps chugging along, buoyed by the new EU deal and President Trump’s visit in February. Vietnamese aviation firms said they would buy over USD 20 billion in parts, equipment, services from Boeing and General Electric.

Trade Data Monitor (info@tradedatamonitor.com) is a Geneva and Charleston, SC based supplier of import and export statistics from 111 countries.